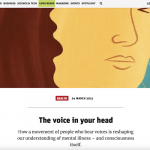 New Statesman: The voice in your head

At some point, in the midst of lockdown, I remember speaking with Sophie McBain – a New Statesman journalist looking in to the Hearing Voices Movement. As is often the case, we had a wide-ranging and deep discussion that spanned my experiences of voices and visions and touched upon some of the parts of the […]

In April, I was invited to Ireland to train CAMHS workers in Dublin and Cork to develop Hearing Voices Groups for young people who hear voices. The tour included a free public lecture at University College Cork, as well as a keynote lecture at the Irish Institute of Mental Health Nursing Conference. The visit seemed […]

A few months ago, I was interviewed for Stella (the Sunday Telegraph’s Magazine). Here is the result. Mental illness at work: the last taboo Mental illness – be it schizophrenia, depression, autism or OCD – needn’t be the end of a career. Far from it, say these women. By Bridget Freer www.telegraph.co.uk/women/womens-life/9651933/Mental-illness-at-work-the-last-taboo.html When four MPs […] 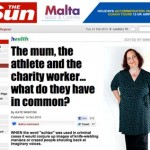