In the Autumn, last year, I met with a lovely young journalist called William Lee Adams in a quaint tea shop in Canterbury. Sat on the sofa, surrounded by shoppers and sightseers enjoying their lunch, we chatted for an hour or two about my experiences of hearing voices and the importance of the Hearing Voices Movement. I’ve done my fair share of interviews, but this one was quite different – the journalist seemed truly interested in my perspective and had quite an open mind as to how the piece he was commissioned to write would turn out. He’d done his homework – reading some essential texts by Romme & Escher, for example, and was also planning to spend the week with us at the World Hearing Voices Congress in Thessaloniki (Greece) to get a more in-depth look at the movement itself. That Newsweek were willing to fund him to do this suggested to me that they were interested in giving the story some care and attention too.

Then, at the World Hearing Voices Congress itself, William – accompanied by a fantastic Greek photographer (Stratos Kalafatis) – seemed keen to talk to as many people as possible. Having already been interviewed, my over-riding memory of this was posing in from of the foliage for the magazine picture. Stratos was quite patient with me (I’m – in general – a photo avoider and much prefer to be behind the camera wherever possible) but I was finding it hard not to laugh when he asked me to look into the sun, pressed back into the beautifully fragranced foliage. It was a surreal experience, which I think it captured well in his photo of me.

The final article – which is available on line in a shortened form for a US audience – is something I think William can be proud of. I feel he really captured the vibe of the Hearing Voices Movement in it – and I hope that Newsweek readers will take the time to explore a phenomenon that they might previously never have considered.

Part of the Hearing Voices Movement, these voice-hearers reject the traditional idea that voices are necessarily a symptom of mental illness. They recast voices as meaningful, albeit unusual, experiences, and believe potential problems lie not in the voices themselves, but in a person’s relationship with them. By acknowledging their voices and staying in dialogue with them, members can wrest back control of their lives – and even start to appreciate the messages they carry. The seek to do this without an over-reliance on medication, which can leave people numb to their emotions. As Dutch voice-hearer Jim van der Wal says: ‘You can’t heal if you can’t feel’.

In relation to Marina, a voice-hearer and web designer in Athens:

Her voices are not always hurtful. They sometimes encourage her to add new ingredients to her recipes and ask her questions about new acquaintances, which she uses to determine whether they can be trusted. But sometimes she doesn’t want to be bothered. At night, when she feels the voices coming, she can envision a hand and they will stop talking before they start. Sometimes when the voices call on her she says ‘I’m not Marina. I’m a rabbit. Let me eat my carrot’. When they become threatening and overheating, Marina can change the topic by distracting them with rhymes. ‘There was a preriod when they would not allow me to eat’, she says. ‘They were telling me there were cockroaches in my food’. In Greek, the word ‘cockroaches’ rhymes with the word ‘eyelashes’, so Marina would bring up the latter, leading to a conversation about cosmetics.

The only critique of the movement is given by Russell Margolis, director of the Schizophrenia Programme and a professor of neurology at John Hopkins University (US). He was concerned that, an organisation that focuses on a ‘symptom’ might lead to people getting so wrapped up in it that they don’t move forwards. Whilst acknowledging the approach could be helpful for some, he was also concerned that it may be destructive for others. I’m really happy that William wrote about my experiences as a counterpoint to this perspective – sharing how learning to make sense of, and deal with, my voices has helped me reclaim my life:

Yet, for many, the hearing-voices approach remains an important counterpoint to the dominant psychiatric model. Waddingham’s voices forced her to confront her past and have helped her push past the pain.

She now takes care of the voices that once tormented her. ‘I can feel a lot of what the voice is feeling’, she says. ‘So I might be pretty chilled out and if I get this sudden jolt of anxiety it might be one of my voices reacting to something. If I can chill them out, and they can feel safe, then I feel safe. Years ago I would have interpreted these feelings as evidence of me being watched. Now I have a way of making sense of them that gives me some autonomy and control.’

‘I feel so privileged’, Waddingham says. ‘I’ve travelled, I’m married. I’ve got cats. And I’ve started my own business. People always say I work too much, and I say, ‘I spent a good decade drugged up with no life. I’m recapturing some of what I’ve lost’. 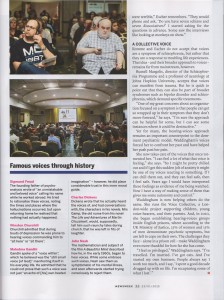 If you would like to donate to either of these charities to support their work, please see their websites.

I am also doing a 6 month-sobriety marathon from 01 January – 30 June to raise money for Hearing Voices Network England. If you would like to sponsor me, please see my Just Giving page: